Americans were once admired for their literacy, self-reliance, critical thought, and family values. After 100 years of compulsory schooling, however, Americans are now among the dumbest, most dependent, and most morally repugnant people on the planet.

How did such a drastic change take place in such a short period of time?

It was a well-funded and deliberate plan - a plan that you won't hear about from the mainstream media or in the establishment history textbooks.  To the financial and political elite who built the system, American schooling had nothing to do with truly educating children.

In two fast-paced, eye-opening sessions, Schooled uncovers the true intentions and designs of American schooling.  Hear the clear, honest, and jaw-dropping admissions straight from the mouths of the architects of modern schooling.  Understand the basic economic and social agenda behind this movement.

And catch a glimmer of hope in a return to a better way. 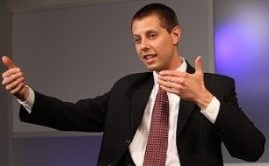 Scott Ritsema is a Bible teacher, author, and speaker who has presented seminars at camp meetings, teacher conventions, conferences, academies, camps, and churches throughout North America. Scott and his wife, Cami, began Belt of Truth Ministries in 2012 with a vision to share the truth about God, the truth about media, and last-days 'present truth' wherever God may lead. Scott's family currently resides in Lakeview, Michigan where Scott teaches part time at Great Lakes Adventist Academy.