Unsettling world events, unstable governments, catastrophic disasters in nature, and feelings of hopelessness all point to the final days of earth’s history. Yet the Bible says there is hope!

Wyatt Allen understands despair. As a former drug addict and Satan worshiper, he faced two life sentences. But while locked up, he challenged the Bible and became what he used to hate: a Christian. Now he travels internationally as an Amazing Facts evangelist sharing prophetic truths and the hope and freedom he has found in Jesus, and preparing people for His soon return.

In this 23-part DVD set, Allen unveils the reliable prophecies of the Bible in a way that is easy to understand and relevant to people of all backgrounds. These messages will explain to you the same essentials truths of Scripture that led him to trust the Bible. Also included is Wyatt’s own testimony of finding freedom, plus a bonus interview of Wyatt on 3ABN television.

Disc 1
1. The Metal Man and the Grand Plan
2. ETA for Doomsday: It’s Nearer Than You Think
3. God on Trial: Why Does He Allow Suffering?
4. The Lamb Who Conquers the Beast

Disc 3
9. Unmasking the Antichrist and 666
10. Left Behind – Revelation’s Rapture
11. Dying to Live
12. Revelation Reveals the Mark of the Beast

It was extremely informative and well prepared. 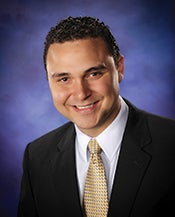 Satanist … thief … rebel … arsonist … junkie … convicted felon … all of these describe the days of his pre-teen and early teenage years. '

Converted … earnest seeker … servant of the Savior … clean and sober … Bible student … Christian … husband … dad … all of these describe author Wyatt Allen as he is today.

God used a 20-year prison sentence to get his attention, but once God had his heart, Wyatt has kept moving forward in serving the God of the heavens who pulled him from the wretchedness of his pit. Today, he continues to seek and serve His Savior as a Bible worker and evangelist.